More than 20 years ago, I asked God to tell me how economic depressions relate to scientific revolutions. He started giving me the right books to read and within a few months, I had the answer. Probably few people ever read the book called Structure of Scientific Revolutions by T. Kuhn. But in it, he says that scientific paradigms change from time to time. I was wondering if the change of science paradigms somehow related to the long-wave economic cycle. There is a direct relationship because when science advances in big leaps, new technology is invented and new industries start. When many new industries start at the same time, there is an industrial revolution. So far, there have been three industrial revolutions. The first one can be said to have started in 1790. The second one can be said to have started about 1890; and the third one can be said to have started about 1973. Do you know what happened industrially in the US at these times? You might remember the semiconductor, PC, laser, and electronics revolutions of the 1970s if you were alive then. In the 1890s, there was a revolution of automobile manufacture, electrical appliances, and steel and petroleum. In the 1790s, the technological revolution had to do with perfecting workable steam engines, "caloric" chemical industries, and making batteries. You might wonder, what does any of this information have to do with you? It is because by understanding this cycle in industry, you can understand why there is a depressionary period in the advanced economies like the US now and how long it will probably last. The theory for this is simple, and I'll try to write it in two pages right now.

First of all, revolutions in the physics happen at about 80 years intervals, give or take 7 years. So the Newtonian physics revolution stated in 1664; the Franklin Fluid Theory paradigm started in 1745; the Faraday Classical Field Theory started in 1820; and the Einstein Quantum Mechanics and Relativity Theory paradigm started in 1905. Also see Chart 1. Can you see the 80 year spacing? What causes this? It is because there is a 3-generation cycle of scientists and inventors. The first generation like Newton and Einstein come up with the general basic assumptions of their paradigm based on the available anomalies. The second generation of scientists like Maxwell or Julian Swinger finish the scientific models, and then a third generation of inventors invent important technologies like the electron microscope and lasers that help to find new anomalies and also help to start new industries going. Isn't this interesting? Industrial revolutions and finding major scientific anomalies happen about the same time. The reason there is a three generation cycle is because there are basic constraints on human learning and cognition. These constraints were described by T. Kuhn, and you can read about them online at the website www. sciencejunk. org 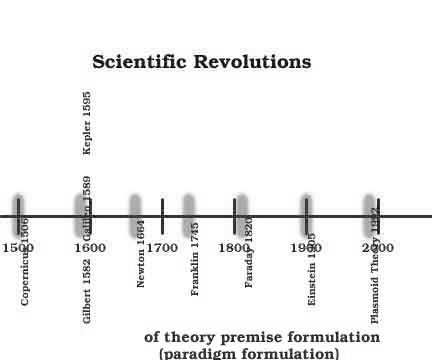 Chart 1: Scientific revolutions in physics for the last 550 years.

Ok, now you know why scientific revolutions happen at 80 year intervals. Industrial revolutions have arisen about 45 to 70 years after the scientific revolutions for the reasons described above. When major new industries like the PC industry of the 1970s start, there are many small companies who invest in inventing better products and features. But about 30 years after the industries start, for various reasons, products standardize. For example, there were lots of automobile companies about 1910 or so, but by 1930 or so, the people standardized the shape and functions of cars, and the companies invested in automation to compete on prices for basically the same product. This is called the "switch from product innovation to process innovation in the industrial life cycle." Since many big industries start in each industrial revolution, when all these industries hit this stage of development at the same time, unemployment rises a lot as human labor productivity rises a lot. People learn to make the same things faster and cheaper without so much human labor, and prices on products may go down, though unemployment goes up as companies have layoffs, merge, go bankrupt, and a few companies emerge as the survivors in each industry. This process is happening now in 2011. One or a few companies in each industry is called an oligopoly or monopoly. This is why unemployment probably really is about 18 or 23 percent if measured how it was measured in the US before the Clinton administration. Based on this model, I predict it will continue to increase during the 2010s. So now you know why the depressions of the 2010s, 1930s, 1830s and 1840s started in the leading economies. As you can see, the timing of these depressions are a little more irregular than the timing of scientific revolutions, but they still average about 80 years apart.

However, this isn't the only kind of depression that the 80 year industrial cycle causes. Another kind of depression happens during the industrial revolutions because old industries die off and new ones start. Remember the 1970s? A lot of "rust-belt," "smokestack" industries closed in the US, and the new industries stated. See Chart 2.  At those times, in contrast to the first type of depression I talked about, the US has had depressions or deep recessions when productivity growth is historically low. It dipped to about .5% per year in the 2nd and 3rd Industrial Revolutions. 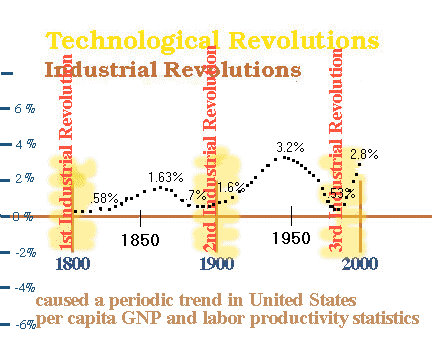 The kind of depression that the US is in now is called a "technological acceleration depression." Productivity growth is rising quickly because labor is being unemployed. This means that a lot of people will be facing unemployment in the next few years. The US government and central bank made and distributed a lot of money in the past few years. This kept the US stock market up, but in the long-run, it caused the US people a lot of damage.

In Chart 4, you can see that the shaded areas marking the depression and deep recession periods are roughly spaced 40 or 50 years apart. In other articles and my book, I explain why the 19th century economic depressions were spaced 50 years apart instead of 40 years apart. This led N. Kondratieff and J. Schumpeter and other economists to speculate about a cycle of 50-year economic long waves in advanced economies, but the depressionary periods were spaced 40 years apart in the 20th century; and this present economic slump is following the 40 year pattern. In the middle and late 1700s in Europe and North America, Benjamin Franklin’s Fluid ideas were unusually quickly adopted and developed, and this sparked the First Industrial Revolution to begin only about 45 years after his introduction of the basic assumptions of the physical paradigm of Fluids. 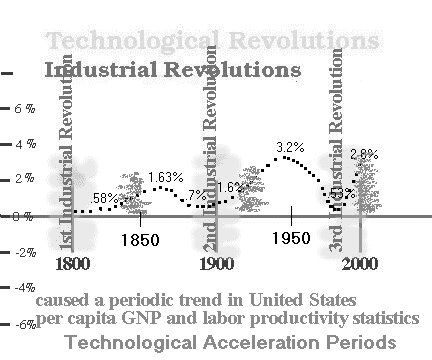 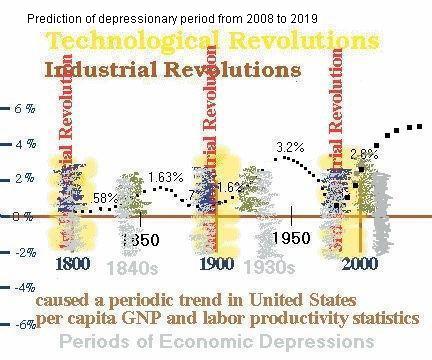 You might ask, is there a new scientific revolution going on now or did one start in the 1980s or 1990s? Yes. It goes by the name of "cold fusion" or LENR. I call it the "plasmoid paradigm." I am not the only one talking about cold fusion energy. Gerald Celente who has been unusually accurate with his annual predictions said that last year (2011) would see a new energy revolution of cold fusion. Even if he is off on this prediction, much has been discovered about this new kind of physics phenomena. For more information, see the latest international cold fusion conference in India news (1) and my site (2).

Could brothers and sister help me get this news published? If you have ideas or questions, write me at onyshua @ gmail .com Does understanding the underlying economics help you make decisions? How can you know these ideas are right? Pray about it, but also see that the theory has been right since 1991 about general trends.